In this Monday’s “Learners with Exceptions” class, the lecture given by Ms. Molly Kelly-Elliott focused on “Specific Learning Disabilities.” She started with the topic of dyslexic learners, but then moved onto about ADHD (not a SLD, but it can sometimes be seen in these students as well).

Imagine, she said. Your son comes home from school and he knows he has 20 math problems due tomorrow and a rough draft for a paper due on Friday. You tell him to get his homework done and you see that he’s not doing minecraft or surfing the web or anything. You see that he’s actually working. And when he comes down three hours later you say, is your homework done?

You look over his shoulder and, sure enough, see that he only has one a half pages written.

So you think, what?! How? This is a paper that you could’ve knocked out in thirty minutes! What is wrong with this kid?

But that’s just the way he is. He doesn’t think ahead and realize he should probably prioritize his homework and do the twenty questions of math first–the ones that are due tomorrow. He doesn’t think about the consequences. He has seven tabs open, doing research for this one paper–this rough draft–that is due Friday and he is completely unaware that he is taking up too much time with it.

Example after example she showed us. Slide after slide popped up, analysing these students.

“Metacognition and Executive Functions of the Brain”

You know, we’ve got to help these kids! She said. I mean, can you just imagine? Their brains are just making it harder for them and everyone else around them seems struggle-free, but they just don’t know. So they start to feel helpless and worthless and their self esteem drops–I mean of course it does! Wouldn’t yours??

She went on and on, urging the class to be empathetic. To put themselves in the shoes of these kids. And although the main topic of class was SLD, every example she used was a student with ADHD.

And every characteristic was one I resignated with.

Every example was a story from my childhood.

I was the student on the slides, being analysed in that classroom.

But she was right. I didn’t know. And even after that class, and even sitting here right now, there are things I don’t know about this disorder. This way that my brain works.

When I went in to see that therapist at 15, I didn’t think I could possibly have ADHD because I didn’t think of myself as uncontrollably hyperactive. And they didn’t sit down with me and say, you have a disorder called inattentive ADHD, but it’s something you can totally handle and deal with. It can explain some of your behavior or personality traits, but there are also some struggles that come with it that you might just have to work a big harder to overcome, just so you don’t have too much trouble in the future. Here, let’s focus on getting you (and keeping) organized and let’s work on some strategies that will help you with your schoolwork, like prioritizing and setting goals.

They didn’t say any of that. Instead, I learned I have ADD, but don’t worry because it’s basically a dime a dozen with your generation, oh and here’s some meds that’ll just fix you right up. Those don’t work fast enough? Here’s another brand. Oh, except that’s not on your insurance, so let’s switch to that one. Shoot, you’re having heart palpitations? Let’s do some tests–okay you have something called POTS, here’s three pamphlets and some more readings. This can help explain certain things you’ve been dealing with because it’s something you’ve had for quite a while, but it’s totally manageable. Here are some more tips and stories of other people with this. Do your research. Come to me with any questions. You’re totally fine.

Oh, back to ADD? Umm, here try this pill. Feel good? Good. Because without it you might start feeling completely worthless and fall into a downward spiral of depression and self-hatred. Haha yeah, sucks. 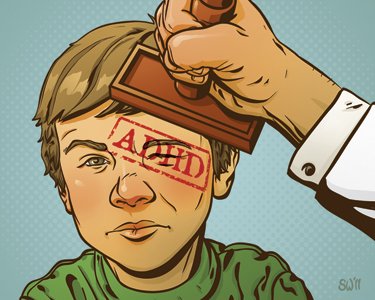 So that brings us up to speed to the present, where every new discovery just seems to hit me like a ton of bricks. And sitting through that class did just that. I blinked back tears as I sat in the corner of the room and tried my best to inconspicuously wipe away any that had already begun to fall.

But it’s so weird going through school to become a teacher, because you realize how much more help you wish you would have had when you were there. I wish I was offered a class about how to study rather than a practically pointless study hall. I wish my English teachers had shelves in their classrooms, filled with row after row of alternate books we could read and discuss in class, or separately with them, because there’s so much literature I wish I hadn’t missed out on in my coming-of-age years. I wish my guidance counselor actually knew who I was past a transcript and an ACT score and, I don’t know, actually offered guidance.

My high school years are behind me, though, but I’ll still get to see thousands of students go through them themselves when I actually become a teacher.

I don’t know, I guess that’s my revelation here. There’s a lot of progress to be made in schools (and I only touched on a very very small part), and I’m determined to see it through.

I’m just trying to minimize the amount of tears shed in college.

It is the final day of the 3 days, 3 quotes challenge, and I think I found a new favorite: 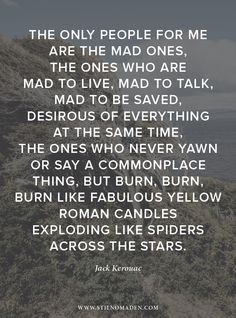 “The only people for me are the mad ones, the ones who are mad to live, mad to talk, mad to be saved, desirous of everything at the same time, the ones that never yawn or say a commonplace thing, but burn, burn, burn like fabulous yellow roman candles exploding like spiders across the stars.” – Jack Kerouac, On the Road

For the past two days, I’ve shared a quote, and then gave my thoughts on it, or told why it’s important to me. But this… this one, to me, is literary perfection.

I mean, I find myself typing to try and make my case, but I’m just quoting him again. Every word in this quotation is perfectly, and it makes me wish that more people in my life were the mad ones. Because I think those are the people for me, too.

Yesterday I wrote about how remarkable I find people who can pick out the perfect words, and by combining them in a way that I never see until after the fact, they create wonderful quotes that we repeat and share and even write on canvases and notebooks and posters. Today I have the perfect example to share: 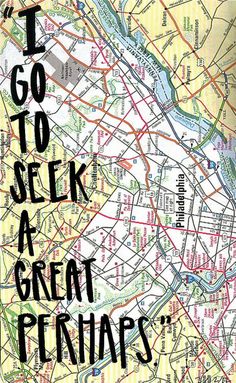 “I go to seek a great perhaps.” – the last words of poet, Francois Rabelais, read in Looking for Alaska by John Green.

The first time I read this, I thought it was perfect. This is a feeling I have had for as long as I can remember, and it can be summed up in one perfect phrase.

When I was younger, I constantly thought about moving. I didn’t have a bad childhood by any means, but I always wished I could get away and meet some new people. I wanted to be the new kid. I wanted to experience what growing up would be like in different cities–different states. And even still, I sometimes dream about transferring colleges just to get a taste of something new, even though I realize how lucky I am to be at Miami, and how much it really is my dream school.

But I’m constantly thinking about the great perhaps. And, though I understand now that it is important to be content where you are and be in the now–experience the present–I will continue to dream. I’m going to study abroad and I want to work overseas and, in fact, I want to work a lot of different jobs just to get all of those different experiences. Just to give myself an opportunity to create those stories.

I continue to seek a great perhaps.

A few weeks ago, I was nominated to do the 3 Days, 3 Quotes challenge (you can find the original post here at My Overflowing Thoughts–thanks again!) and I have finally gotten around to doing it. I’ll nominate some of my favorite bloggers at the end of the three days, but here’s my first quote: 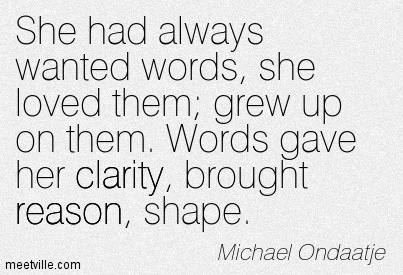 “She had always wanted words, she loved them; grew up on them. Words gave her clarity, brought reason, shape.” – Michael Ondaatje, The English Patient

I really relate to this quote because I really relate to this girl (though I have yet to read the book). I have always been obsessed with quotes. I have always been so impressed with people who can perfectly fit words together as if it’s a simple math equation–whereas whenever I try, I always find that something’s off. Nothing I say I ever feel can be quoted. Nothing I say is ever perfectly worded or worthy of being written on a poster or hung above a doorway. Everything can be better said by someone else.

And that’s okay! Because I have these quotes of people before me who so easily conveyed their thoughts with the best words. And sometimes I think that if I study them enough, I’ll figure it out. How to come up with that perfect sentence. And then one day I’ll be able to piece together my own perfect sentences and someone will want to quote me.

But until then, I’m excited to share with you my favorite words that were said by someone else.