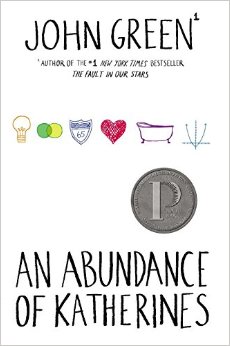 On Friday night, my sister and I decided to see Paper Towns. I read this book last summer, loved it, and was ecstatic when I found out that they were turning it into a movie. And I am glad to report that it did not disappoint, and might be my favorite movie of the summer so far.

After it ended, we headed down the street to our local Books-a-Million, where I dropped $78 on books and road maps (I was very influenced by this movie). But one of the books I picked up was another John Green book, An Abundance of Katherines. I had no idea what it was about, but I like John Green, and I own all of his other books, and it was $10. So I bought it and read it within 12 hours. And here’s what I thought.

First of all, it’s a very weird premise. This child prodigy has been dumped by 19 Katherines, and, in fact, has never dated anyone by another name. Bizarre, right? And I really don’t want to spoil it (though there’s not much to spoil), so I won’t say much else about the actual plot. But I will say that the characters were very interesting and it was very informative. I feel like I know a lot more random facts that I found interesting (even if the supporting character, Hassan did not).

But here’s the thing: it’s a John Green novel. So, if you like stories that follow the same formula as Paper Towns and Looking for Alaska, you’ll like this one. There’s a boy who really doesn’t do much. He’s not necessarily opposed to adventures–I mean, he’ll certainly follow the main female character into one without question–but he’s just used to staying home. And then he falls in love with this quirky, interesting, intelligent, beautiful girl.

That’s really all I can say without giving away the ending, but if you asked me if I would recommend it, I still probably would. It has tons of overlaps with his other stuff (the above formula, discussion about oblivion like in The Fault in Our Stars, characters obsessed with road trips), but there were still some interesting differences from AAOK that I enjoyed. I especially liked the last bit about the stories we tell and how they can impact people.

So, I’ll give it 3 stars, and probably won’t be dying to read it again any time soon, but it certainly wasn’t a waste of time. Parts of this story will definitely stick with me.