The other night, I was thinking about the “WWBD” acronym and all of its variations. I thought, that might be an interesting mantra to live by. To go about everything after first thinking about what someone else would do.

But who should be this person?

I don’t think I should live by “What Would Batman Do,” because that probably wouldn’t make much sense in my every day life. And I’ve seen “What Would Blair Waldorf Do,” but that seems extremely problematic. Don’t get me wrong–I love Blair and recognize her as a powerful, headstrong, admirable (although fictional) character, but I don’t know that I should aspire to be just like her. She certainly has her flaws.

And then I realized, if I’m really going to live by this “WW_D” mantra, I’d have to pick someone that I want to be exactly.

Which is why my new mantra is “What Would Sammy Do?”

Well it is sort of dumb. Because throughout my days (I decided this a few nights ago), I’ve been repeating that question in my head and answering with, “Sammy would check her email immediately instead of putting it off.” “Sammy would do the dishes as soon as she gets home.” “Sammy would not spend hours watching YouTube videos.” When, in reality, Sammy does all of these things.

But not the Sammy that I want to be. I’ve struggled with the idea of loving myself–I know I’m supposed to. I know that’s the first logical step to solve many of my problems. But I can’t do it (fully). Not while there are so many things about myself that I hate. That I wish to change.

Because I know that somewhere deep down, at the root of my being, is someone who I love. There are certainly things I love about myself, and I’m going to play them up with this mantra, but it’s sometimes hard to see them when I just see everything I’m doing wrong and all of the mistakes I’m making. The procrastinating. The laziness. The poor health habits. Even the self-hating is an awful thing I do!

But I like my creative side. I like that I’m a dreamer and I like that I have big plans for my future. I like having a blog and a journal and being able to express myself through my writing. I like the majority of the thoughts that pass through my head each day, and I like the random things I notice and (some of) the little quirks I have. I’m not setting out to change all of that, because I feel that’s part of what makes me who I am.

It’s all the other bad habits I could do without.

So, I’ve decided to just be who I want to be. And it sounds dumb when I talk about myself in the third person like that, but it’s really helped so far. Just by thinking, “Sammy doesn’t procrastinate,” “Sammy is responsible,” and “Sammy cleans up after herself,” I’ve noticed an, albeit small, difference.

It gives me hope that one day I’ll be exactly who I want to be.

PS. This picture basically sums it up. 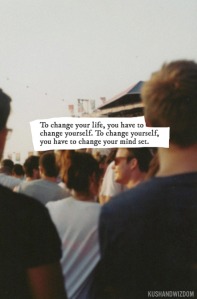