It’s been a while, hasn’t it? I’m going to get back around to the weekly pictures but for a while it was just kind of a chore, so I stopped. One, because I want to spend my time doing something I enjoy and something I’ll look forward to. And two, because I’m really bad at completing my chores.

But I have an update. I mean, it has been a while since I last wrote. I’m done with school now, and I’ll never be a freshman again. Things are changing and some have already changed.

But I have an idea. I’ve been realizing more and more how awful my memory is, which is a really sad realization. I feel like sometimes my memory is very selective, too. I think I just block things out. Just an example: I hated my brother all throughout our teens. But when I think about this, it’s sometimes hard to remember why, exactly. I’ll think, well he was mean to me, but then I can’t think of anything he ever did, specifically.

And then I’ll read my journal. I’ve kept a journal since the sixth grade, but when I was in high school I only wrote in it a few times and it was always after something happened. A lot of this had to do with Sean. So I’ll read about some of the things he would say to me, or stories about some of the fights we’ve had, and it’ll all come rushing back. Memories that I just blocked out because they were embarrassing or hurtful or just painful to relive.

Anyway, these memories aren’t exactly the ones I wish to recall, but there are some stories that I forget about completely until something random reminds me of them. And some of those stories are worth remembering, and worth sharing.

I’ve been watching a lot of How I Met Your Mother recently, which is how I got the idea to create a storybook. I want to start documenting the momentous occasions of my early adult years. I want to have stories I can tell my children.

Because every good story has a moral, right? A lesson that needs to be learned, sometimes the hard way. There’s definitely a moral of the story I’m going to share tomorrow…

So I have a hard copy of this, but I’m also going share some of these stories here, because why not? I’ve been neglecting WordPress lately, and I’d like to get back at it. And what better way to get back at it than with a story? 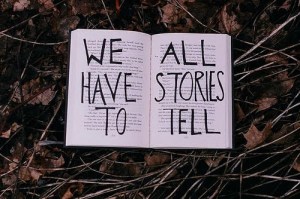